By mid-year Bell is required to file its Pension Plan valuation with the Office of the Superintendent of Financial Services (OSFI), the pension regulator. The valuation gives a snapshot of the financial health of the plan, as of the end of the previous year. Bell has recently filed information about our Pension Plan, as of December 31, 2011. This article includes highlights of that report, together with comparisons covering the last several years.

The solvency valuation measures the extent to which a plan is capable of paying all pensions even if the plan were to wind up. It is a financial snapshot of the plan. If there is a surplus, then all pension obligations can be met. If there is a shortfall (or a negative surplus as depicted in the graphs), then the plan isn't able to meet the pension obligations. Should Bell run into difficulty and wind up its plan before the plan is fully funded, then pensions would have to be cut. While there is no indication now that a cut is likely, there is no assurance that this can never come to pass. That is why we in BPG look at the solvency valuation as a measure of the security of our pensions.

The blue line indicates that the solvency position of our plan has worsened in the past year; the shortfall doubling to a bit over $3B since last year. Over the last three years, Bell has contributed to the plan more than it was required to do by the pension rules set by the Government. The red line shows that the solvency shortfall would be even greater, at about $4.2B, had Bell not made these voluntary contributions.

The chart above depicts the same information, in percentage terms. It shows that if the plan were to have been wound up at the end of last year, there would be a 20% shortfall in the funding of the plan. That would put 20% of your pension at risk.

Why is the plan so poorly funded?

An obvious question is “If Bell is making all these extra contributions, why is the plan so poorly funded?” There are many factors at play, and two are highlighted here.

1) Costs continue to rise
First, the cost to offer a defined-benefit pension plan has gone up. This has been the case in previous years, and the cost has risen yet again over the last year. To illustrate the point, from the Bell report we can determine that there must be 72 cents in the plan today so that the plan can pay a pension amount of one dollar ten years from now. Of course, when doing its plan valuation, Bell has to consider every dollar that makes up an individual's pension, for every year in the individual's future, and for every individual in the Pension Plan (including their survivor). When Bell did the same calculation a year ago, the equivalent of the 72 cent figure was 65 cents.  This change from 65 cents to 72 cents accounts for a very substantial increase in the plan's solvency liability. Though a number of factors account for the annual difference in financial position, this is by far the largest of all factors. There would have to be a very substantial  growth in assets to make up for this difference, just to keep the plan's finances stable.

2) Asset growth has been modest
This comes as no surprise to anyone who follows developments in the market. Equity markets have been volatile in recent years, with some considerable uncertainty around returns in the future. Fixed income investments have more modest returns, but less volatility. In the last year, the return on investments in the Bell plan has been about 5%, not large enough to make up for the large liability increase. At the same time, one of the steps Bell has taken to limit the uncertainty in the investment portfolio has been to increase the proportion of fixed income investments relative to equities. 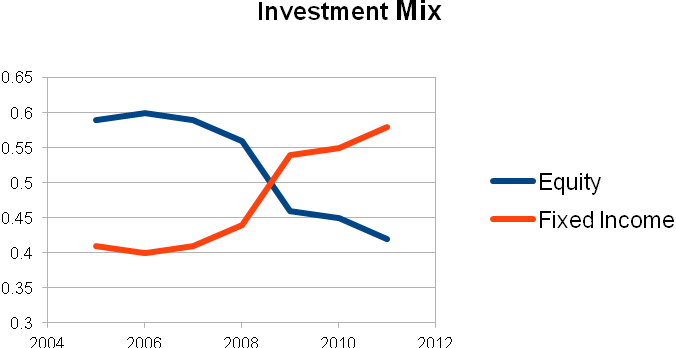 To put the results for the Bell plan in perspective, the chart below depicts aggregate results for the roughly 400 plans regulated by OSFI, of which Bell is one. The chart shows that on average, plans cover about 80% of their solvency liabilities, and 58% have a shortfall of at least 20%. This is an unhappy picture, with a troubling trend, and it shows that Bell can be considered typical of all federally regulated plans.

Furthermore a recent study by DBRS of 451 defined benefit plans in Canada and the U.S. showed that as of the end of 2011, two out of three plans had a shortfall of at least 20%.